In the newest installment of our “10 Questions With…” series, we spoke with Matthew Matrale. Matt started working at the Eden School in 2006. As a Job Coach, he works with students as they transition to employment. He also spends part of his summer working as a Coordinator at the Eden at Crossroads Residential Program.

Matt Matrale with a student at the Eden School

What was your first impression of Eden?

What’s a typical day like as a Job Coach?

It’s great, it’s a really cool job. A typical day involves getting the guys off the bus and then we do two shifts. I’ll take the students out in the morning and then in the afternoon as well. We go out for a little over an hour at each job site. It’s a really great experience for the kids to get out in the community and learn how to behave and use the skills they learned in school and apply them to a potential job.

What’s your favorite part of the Eden at Crossroads residential program?

I think doing relay races and the color wars during spirit week. We see not only the kids’ faces light up, but the staffs’ faces too. We have so much fun, and I’ve made friendships that have lasted a longtime.

I have two, The Last of the Mohicans and The Matrix.

If you could only eat one food for the rest of your life, what would it be and why?

I’d have to go with southern BBQ — real southern BBQ you can only get down there — because I don’t get a chance to eat it that much.

If you could travel anywhere in the world, where would you go?

How would your friends describe you? 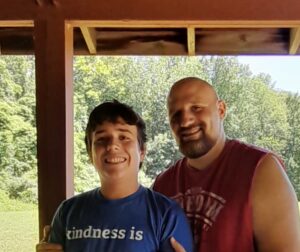 We were having a meeting last night and they were talking about me and they said “he’s so calm, when a behavior happens he just stays calm.” So I guess very patient and calm, that’s what people say.

What would you like people to know about the students you care for?

I think that at the end of the day they are just kids. They have emotions just like any other kid, and they are so much fun. Just because they have autism doesn’t mean they can’t have that really great personal relationship with you. They’re such a wonderful part of my life. I get a little emotional sometimes because I’ve known some of these guys since they were little and now they’re graduating. They really are a big part of my life.

What’s the most rewarding part of your job?

I think anytime you see a student make any type of an improvement, that’s incredibly rewarding.

At camp, it’s supposed to be fun so we really focus on the kids just having a great summer. When you see them smiling and laughing that’s super rewarding because you know they’re enjoying themselves and having a good time. At the school, I think the best part is anytime you see any kind of improvement. Even a tiny bit of improvement can be huge because then you know you can get another bit of improvement and keep working off of that.

What was a recent improvement that stuck with you?

Sometimes you have to really think outside the box and figure out a way to teach it so it’s going to make sense to them. I was working with a student once on double digit addition, and it just wasn’t clicking with him. I was using an abacus to help explain the different place values, and then I started using other types of materials like cubes and blocks. A couple of weeks later he was doing it all by himself in his head. I would just give him the sheet and he would do it independently!

Your ticket for the: 10 Questions With Eden School Job Coach Matt Matrale