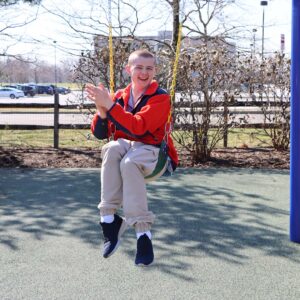 There’s been a lot of change in Michael’s daily routine at the Eden School, but that hasn’t stopped him from continuing to master new life skills.

Michael is getting ready to transition to a new classroom next year by spending his mornings in his future classroom, High School 2.

Teachers are impressed with how well he’s handling the transition. Not only has he been enjoying his time in the new class, but he’s continuing to excel at a variety of programs.

From introducing new phrases to use on his iPad to responding well to modifications, watching Michael grow has been the highlight of the year for his teachers. He now is able to ask teachers for things, such as breakfast or an extra minute of time on the crash pad or web chair. 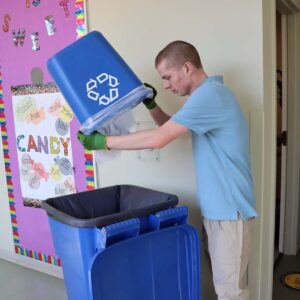 “It’s been great to see him generalize his communication skills into a new classroom as well as seeing him learn new phrases,” said Dara Blatt, Lead Teacher, High School 2.

One of the skills he’s currently working on is filling restaurant caddies with mustard and ketchup bottles. He’s now able to assess which caddies have which bottles, and fill in the rest accordingly on his own — a big step in his ability to do tasks independently.

“It’s really cool to see him respond well to modifications and find out how he thinks and what makes sense to him. We use that to help him be more independent,” said Sophie Davis, Head Teacher.