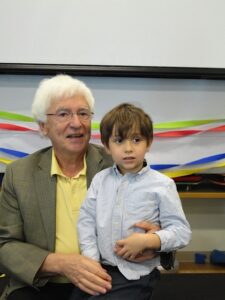 Claude George with his grandson

Since Orin’s earliest days at the Eden School, he has kept the same morning routine. He quickly gets dressed and sits near the window, excitedly waiting for his school bus to arrive. He then jumps to his feet, picks up his backpack, and runs onto the bus to start his day.

For Orin’s grandparents, Claude and Martine George, seeing their grandson eagerly head to a school he loves is a dream come true. In fact, the Eden School isn’t just a place Orin loves, but a place where he’s able to grow and learn in a nurturing environment.

Orin was born in Manhattan, and he was diagnosed with autism when he was 18 months old. He received some early intervention while in daycare, but approaching age 5 it became clear that his education would become unmanageable for his parents in NYC, with different locations for schools throughout the day. Orin’s mother, Emmanuelle, and her husband decided to move to West Windsor, where they discovered the Eden School.

Since joining Eden when he was 5 years old, Orin’s communication skills and behaviors have improved tremendously.

“Orin’s growth at Eden has been remarkable,” said Claude. “Orin has become more stable, with less frequent tantrums. He’s learned many words and knows how to count. He often shadows his brother Lucien and tries to participate in activities.”

Claude and Martine have witnessed their grandson continue to master new skills every school year.

“When Orin’s classes were held online because of the COVID-19 pandemic, I was helping him and I was impressed with the quality and professionalism of his teachers,” said Claude. “[This] also gave me the opportunity to observe how Orin was at ease with using the keyboard on his computer for numbers or letters.”

Being able to witness their grandson’s growth firsthand over the years has inspired Martine and Claude to give back to Eden in a variety of ways. In addition to participating in the virtual Eden Autism 5K and Claude’s service on the Board of Trustees, Claude is also a member of the Noonan Legacy Society. Members of the Noonan Legacy Society have expressed their commitment to Eden through a very special and important form of financial support — making plans to remember Eden in their will and related plans. 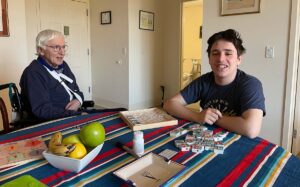 “The Noonans were extraordinary friends of Eden. Bill, in particular, was committed to giving of himself and his resources to improve the lives of others. While their legacy gift to Eden was especially significant, he would be the first to remind us that every gift to Eden, regardless of its size, is meaningful, useful, and necessary to the sustainability of Eden’s services,” said Melinda McAleer, Chief Development Officer at Eden. “Claude is an example of a family member who expresses his gratitude for Eden through his annual gifts and is making plans to include the organization in his long-term financial planning. His interest in learning more about how such planning can benefit him and his heirs, as well as Eden, is inspiring.”

When thinking ahead to Orin’s future, Claude and Martine are grateful for the knowledge that he’ll be able to use the skills he’s learning in the classroom throughout his life, in the community and at home. From working in the kitchen at a restaurant or cafeteria to working at the checkout in a supermarket, there are multiple job opportunities out there for Orin.

And with Eden’s commitment to services throughout the lifespan — from school age into seniorhood — Martine and Claude are comforted by the thought that Orin will one day share a home with other Eden adult participants who live engaged and fulfilling lives with Eden there every step of the way. By indicating their intention to leave a contribution to Eden, they help ensure Eden’s sustainability and quality of service.

Your ticket for the: Donor Spotlight: Eden grandparent Claude George gives back in big way