In the late 1980s, Robert “Bob” Humes was invited to join Eden’s mission by founding president Dr. David Holmes. Bob does not have any children with autism, but he was moved by the work being done at Eden to help families. Today, more than 30 years later and after serving as Chairman of the Board of Trustees, Bob is still finding ways to give back to Eden. 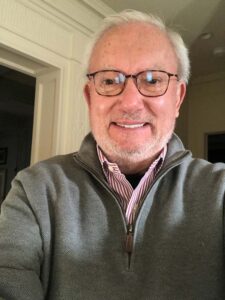 Bob Humes is a member of the William J. Noonan Legacy Society.

“I was blown away by Eden’s mission and work from the get go,” said Bob. “As a volunteer and donor, you can see the direct impact of your time and financial support. That motivates me. It adds a great measure of reality and meaningfulness to what you’re doing.”

Bob currently serves on the William J. Noonan Legacy Society committee. The William J. Noonan Legacy Society was established to recognize individuals who have made a planned gift to Eden Autism. These gifts include a bequest or charitable income gift — including charitable gift annuities and gifts of life insurance, among others — from donors from a broad range of financial backgrounds.

As a member of the Legacy Society, Bob believes that securing a future for Eden’s participants is one of the most important things Eden can do. While other funding goes directly to Eden’s current programming, the Legacy Society helps fund an endowment to ensure Eden can continue to support children and adults with autism for decades to come.

“Bob embodies the spirit of philanthropy,” said Eden Autism Director of Development Melinda McAleer. “His commitment to the welfare of others is outstanding. Eden, as with so many other mission-driven organizations that support individuals and causes, has benefited greatly by his leadership and the generosity that he and his wife Nancy express.”

Bob believes in giving back to the community, especially through work with nonprofit organizations. In addition to his work with Eden, over the years he has been involved with many nonprofits, including the American Red Cross and the Mercer County Community College Foundation. Through his years of support Eden, he was struck by the constant in the quality of services.

“The constant that I have seen over the years is the primary focus on doing what is best for Eden’s participants — whether they be the school age or the adults,” said Bob. “The focus has always been on doing everything that is possible to help these children and adults live as full a life as possible.”

It’s a quality of care that he hopes to help continue well into the distant future with his planned gift to the Legacy Society.

The Legacy Society membership involves no dues, obligations, or solicitations, but it does allow Eden to thank and recognize members for their planned contribution. Benefits of membership in the William J. Noonan Legacy Society includes invitations to special events and seminars. But the most important benefit is the satisfaction in building for Eden’s future and the future of its participants. For more information about the Legacy Society or planned giving, please visit our website.

Your ticket for the: Donor Spotlight: Robert Humes supports Eden’s future through the Legacy Society