Over a dozen Eden Autism participants hit the slopes and showed off their athleticism during the Special Olympics New Jersey 2020 Winter Games. Held the first week in February, roughly 300 athletes from around the state competed in this year’s Winter Games. 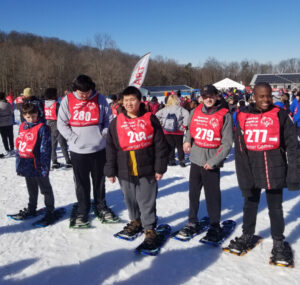 Students from the Eden School competed in the 2020 Winter Games earlier this month.

Participants in the Adult Services Program showed off their skills in a variety of sports, including alpine skiing, snowboarding, and cross-country skiing. Carl Ross E. won three gold medals for his impressive efforts in the 4x1K relay, 500-meter, and 1K cross-country skiing races.

Joelle B., Charles S., and Holly K. also won first place in their cross-country skiing divisions. In the alpine skiing and snowboarding races, Gregory B. took home the gold in his division.

Students from the Eden School competed in the 100- and 200-meter snowshoeing games, where Orin S. and Zachary Z. won gold in their divisions.

Many other Eden athletes took home silver or bronze medals, including Chris D., Kevin R., Eric S., Kevin V., Gregory B., Antonio L., Steven G., Kevin P., Sammy P., Patrick M., Brian M., and Hassan A. We are extremely proud of all our Eden athletes for their hard work and commitment that helped them shine during the Winter Games.

Every athlete demonstrated determination and courage at the Special Olympics, and most importantly, they did it all while having fun with their friends, teammates, and coaches. From the opening ceremonies to a special athlete dance, every moment of this year’s Winter Games was filled with smiles and laughs.

For the full list of results from the 2020 Winter Games, visit sonj.org.

In addition to the Winter Games, the Special Olympics NJ Bowling Competition was also held on February 9, where Eden participants from our Adult Program and the Mercer Bowlers 2 team showed off their bowling skills.

Ross A., Gregory B., and Jordan G. won gold for their efforts, while Tom K., Sammy P., and Kevin R. won silver.

Since November, bowlers have been attending weekly practices in Hamilton to refine their skills for the big competition. We are incredibly  proud of all the bowlers who competed in last weekend’s Special Olympics competition. Their hard work and enthusiasm is an inspiration to the entire Eden community.

The Winter Games are finished, but Special Olympics activities are far from over! Thousands are expected to head to Seaside Heights on February 22 to jump in the ocean for the annual Polar Bear Plunge.

More than 40 brave souls from Eden Autism have pledged to make the leap into the chilly Atlantic to raise money for Special Olympics. The Frozen Hedgehogs team is attempting to raise $10,000 this year, and you can join their team or donate to their page here.