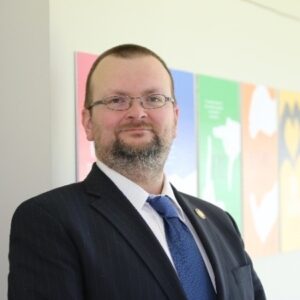 During his 21 years working at Eden Autism, John Zahorsky has raised thousands of dollars to support Eden’s mission. From volunteering at events to launching his own fundraisers, there are few things Eden’s Director of IT, Compliance & Privacy Officer won’t do to show his support. In 2005, he even dyed his own hair blue to raise money and awareness for Eden.

John is once again launching a unique fundraiser to support this year’s Eden Autism 5K & Fun Run/Walk. If he meets his fundraising goal of $2,500, he will dye his hair orange for the entire month of October. It’s a way for him to not only raise money, but awareness about all that Eden does for children and adults with autism.

“Eden cares greatly about our participants, and nothing showed me that more than our DSPs during the pandemic,” he said. “Our DSPs did not want to leave our participants at risk with unfamiliar people during challenging times. Whenever I think of our DSPs — some of which have been here longer than I have — and their dedication, it refills me with faith. Faith in our mission and faith in who we are as a people and a company.”

John has been involved with nonprofits since he was just 8 years old, when he volunteered at a Project Freedom event. He later went on to join their Board when he turned 19. Unhappy with his previous job in the for-profit world, he began to search for openings at nonprofits. That’s when he found Eden, and he hasn’t looked back since. 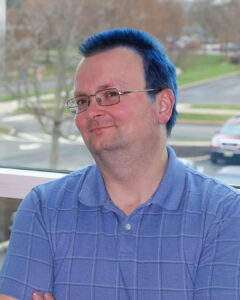 In 2005, John Zahorsky dyed his hair blue to raise money for Eden Autism. This year, if he reaches his 5K fundraising goal, he’ll dye his hair orange for the month of October.

His Eden career started in fundraising as the Development Associate,, but he eventually got his dream role creating Eden’s IT Department in 2008. While he enjoys the work his job provides, it’s the people that make Eden a truly special place.

“My first impression of Eden was the people. The people I worked with, and those outside of my department,” he said. “Within a couple years I got to know a couple of participants, and watching them grow and develop over the years was moving.”

John’s stories of Eden have resonated with people during his time here. Some of the vendors who work with Eden through the IT Department make annual donations to Eden. “I have salespeople and vendors who have left the company that they started with who still support the 5K,” he said.

“John is not only a dedicated employee, but a wonderful ambassador of Eden Autism’s mission,” said Chief Development Officer Melinda McAleer. “His personal contributions and those that he has inspired through his creative fundraising are truly appreciated and worthy of acknowledgement.”

For John, the 5K is Eden’s most accessible fundraiser for most people, making it easy to get more people involved each year. “It’s the event where a $5 donation, which always matters, matters more because you can see the impact in your fundraising goal, your teams, the peer to peer fundraising aspect of it,” he said.

The 2022 Eden Autism 5K & Fun Run/Walk will be held at the Eden School on Sunday, October 2. And hopefully, John Zahorsky will be in attendance with orange hair.