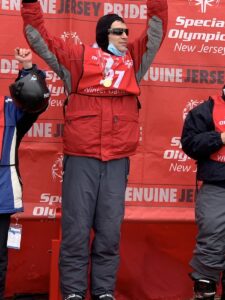 Athletes from across New Jersey hit the slopes during the 2022 the Special Olympics New Jersey Winter Games.

Six athletes from Eden Autism competed in the 2022 Winter Games — held February 7 and 8 — and they all came home with medals.

In the cross country skiing competition, Holly K. and Charles S. won first place in their respective divisions. Antonio L. also took home a silver medal for his efforts in the 50M race.

In the Giant Slalom event, Kevin R. took home the gold in his division, while Gregory B. and Chris D. took home second place in their divisions. Eden athletes also showed off their skills during the Super-G competition, where Gregory B. won first place.

All of Eden’s athletes also won an additional silver or bronze medal during the Winter Games.

While the events were scaled back as a precaution against the coronavirus, athletes were still able to shine and relish their time on the slopes.

“Even though everybody was used to it being so much bigger than what it was, they all did really well,” said Recreation Specialist Trey Norwood. “They had a great time, and they were so grateful to be there.”

The Winter Games aren’t the only activity making a triumphant return. The Polar Bear Plunge returns to Seaside Heights on February 26.

More than a dozen brave souls from Eden Autism have pledged to make the leap into the chilly Atlantic to raise money for Special Olympics. The Frozen Hedgehogs team is attempting to raise $10,000 this year, and you can join their team or donate to their page here.