Three individuals in Eden Autism’s Adult Services program celebrated major employment milestones at Wawa in 2022. Steven Greenberg was honored by Wawa for reaching 30 years with the company. Eric Staffeldt and Kevin Ritter were honored for reaching 20 and 10 years, respectively. 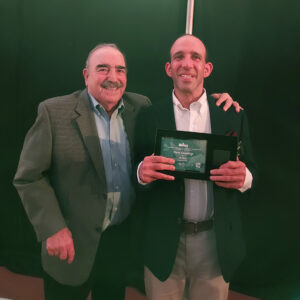 Norman Greenberg smiles with his son Steven, who is proudly holding his 30th anniversary plaque from Wawa.

Steven, Eric, and Kevin were gifted commemorative items from Wawa to celebrate their work anniversaries and were acknowledged at the retailer’s annual service awards.

“We are very proud of Steven, Eric, and Kevin for achieving such remarkable milestones at Wawa. After all these years, they remain committed to their jobs and take pride in their work,” said Eden Autism President & CEO Michael Decker. “We thank Wawa for their commitment to the men and women we support and treating them and all of their associates with dignity and respect.”

This is an extra special occasion for Eden parents. To see their child not only working but being celebrated for achieving employment anniversaries is a tremendous feeling.

“I am very, very proud of him and Wawa too,” said Norman Greenberg, Steven’s father. Norm attended a ceremony in October held to commemorate Steve and his colleagues for achieving major work anniversaries. 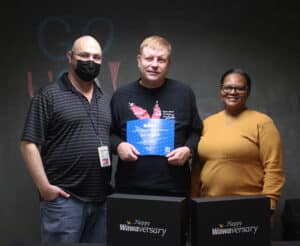 “It is such an inspiration for all of us at Wawa to celebrate the incredible milestones of three associates in our Supported Employment program,” said Dave Simonetti, Sr. Director of Store Operations, Wawa. “We truly value Steven, Eric and Kevin’s longstanding years of service and appreciate Eden Autism Adult Services’ support along the way.”

Wawa and Eden’s relationship began over 40 years ago when Wawa hired Ari Shiner. Then-manager of the Princeton Wawa Joe Bendas worked with Eden’s former President Dr. David Holmes to employ one of the individuals in Eden’s program. Ari became the first individual with a developmental disability to be hired by Wawa, and he celebrated his 40th anniversary with the company in 2021. Today, Wawa’s supported employment program includes over 750 associates and partnerships with dozens of supported employment programs. 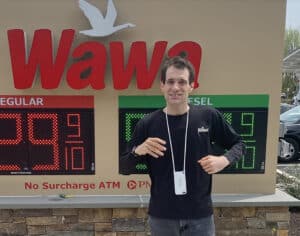 Kevin is all smiles while at Wawa

“Eden and Wawa have given Eric what every parent wants for their child — a productive, happy, and fulfilling life,” said Eric’s parents, Mary and Rich Staffeldt. “It is wonderful to see how he has grown into a contributing member of his community. We are proud of the man he has become, and we are so appreciative of Wawa treating him as a valued worker.”

Several Eden parents echoed this sentiment. Kevin’s parents, Deb and Tom Ritter, are thrilled that he was given the opportunity to work at Wawa for 10 years. “Seeing as Kevin loves to be busy, it’s important to us that his day be filled with meaningful work, especially work that he enjoys,” said Deb. “Wawa provides that, along with a sense of pride and accomplishment to Kev, along with valuable opportunities for social interaction with Wawa co-workers.”

“Wawa is a special company,” said Norm. “They treat their employees — their able-bodied and disabled employees — with the utmost respect and dignity, and they’re happy to do it. It’s a fantastic thing.”

Your ticket for the: Eden Autism and Wawa celebrate major employee milestones