From weddings to on-the-job donations, the Eden Autism community has been hosting creative fundraisers to support individuals with autism! 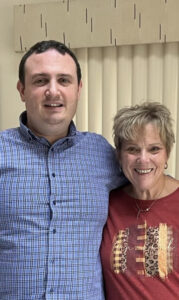 Relator Suzanne (Sue) Nadwodny has a unique way of celebrating when she sells a house — she donates to a nonprofit organization. This year, she contributed to Eden Autism.

Eden has a special place in Sue’s heart. Her friend Linda Adler has a son in Eden’s Adult Services program. She has seen firsthand how much of an impact Eden has on the entire Adler family. Linda’s son Ross lives in one of Eden’s apartments and works at Central Jersey Basketball and Monroe Sports Center.

“I’ve known them about 14 or 15 years,” said Sue. “Ross does amazing jobs. I put him to work all the time doing my mailers, and he loves it. I can give him everything, and I never have to check his work.”

Sue knows how important Eden’s services are for men and women with autism. “Eden has a lot to offer to the individuals as they grow up and become adults,” she said. “There is something out there for these people. There’s someplace warm and functioning to help support them.”

Sue works for ERA Central Realty Group and serves all of Mercer, Monmouth, and Middlesex counties. Being able to celebrate the sale of a house by supporting nonprofit organizations makes her job extra special. “I think it’s something everyone should do,” she said. “When you’re in a customer-based service like I am, I think it’s important to give back to the community.”

Couples celebrate their special day by donating to Eden

Instead of purchasing traditional wedding favors for guests, some Eden family members and friends have opted to spend the money on a donation. Eden sibling Elizabeth Sosnicki and her husband got married when several of their friends were also tying the knot.

“Instead of sending guests home with a favor they may already have, we thought supporting Eden in their name would be more appreciated,” said Elizabeth.

Her brother, Chris, has been with Eden since he was a child, starting at the Eden School and now living in an Eden residence and attending our day program. Giving back to the organization that helped Chris and her family was a wonderful way to make her big day even more special.

Thanks to social media platforms like Facebook and Instagram, it’s never been easier for someone to start their own fundraiser. Whether individuals raise $50 or over $1,000, these fundraisers are a simple and effective way to support Eden.

Not only do they raise money to support Eden’s programs and services, but they also raise awareness about our mission!

Your ticket for the: Eden community hosts creative fundraisers to support individuals with autism