Eden brother raises over $1,000 through ‘Play For Purpose’ music compilation

Over 60 local bands recently came together to raise more than $1,000 for Eden Autism. 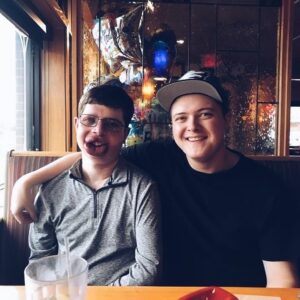 Joey and his brother, Alex.

Joey Affatato organized and curated the “Play For Purpose” music compilation to give back to the organization that holds a very special place in his heart. His brother, Alex, has been a part of Eden since 2015, first joining the Eden School before graduating into the adult program.

“Alex has brought so much joy into my life,” said Joey. “He just really makes the most of everything he has.”

Alex’s journey is one of adversity and triumph. He has Sturge Weber Syndrome and underwent brain surgery for intractable seizures when he was just 6 months old, which resulted in weakness in the left side of his body and limited use of his left arm.

“Growing up, people told us he wouldn’t be able to do so many things — he’ll never be able to communicate like you think he will,” said Joey. “He’s come such a long way in his life just from being at Eden, and he’s blown our minds with how much he’s able to adapt and overcome.”

A Monmouth University graduate with a BA in Music Industry, Joey decided to use his background to organize a unique fundraising effort to help support Eden throughout the coronavirus crisis. He reached out to friends in the music industry and worked with DIMM Entertainment and Hell Minded Records to gather songs for the album.

“We often refer to Eden as a family. Siblings like Joey remind us that it’s not just the student or adult participant we are supporting, it’s their entire family,” said Eden Autism Chief Development Officer Melinda McAleer. “His gratitude and efforts to engage others in Eden’s mission inspires us.”

The compilation features songs from 64 bands and artists spanning genres ranging from rock and acoustic to pop and rap.

“The amount of support I got from family members and friends in the music community was just incredible,” said Joey. “I would tell people that I’m doing this for Eden Autism and my goal was just to raise as much money as possible, and a lot of people donated their music and contributed their time to make this happen. It’s really amazing.”

Joey originally set out to raise $600, but he quickly surpassed his goal in just a few days. “This completely exceeded my expectations,” he said.

“Play For Purpose” is available on Bandcamp for $10. For more information about Joey Affatato, visit joeyaffatato.com.

Your ticket for the: Eden brother raises over $1,000 through ‘Play For Purpose’ music compilation

Eden brother raises over $1,000 through ‘Play For Purpose’ music compilation