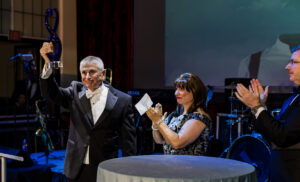 Mark Berkowsky was honored during last weekend’s Eden Dreams gala for his remarkable dedication to our mission.

This year’s gala, Eden Dreams in Cinematic Style, raised $175,000 to help support Eden’s programs for children, adults, and families who are touched by autism. The night culminated with the premiere of the trailer for Eden Autism’s upcoming history documentary, set to debut later this year.

The documentary tells the story of the 14 families who came together to found Eden in 1975, a time when few people had heard of autism. The film explores the earliest days of Eden, the organization’s growth over the past 45 years, and all those who extended a helping hand along the way.

It was fitting, therefore, that current Eden trustee and one of Eden’s most generous supporters, Mark Berkowsky, was honored during the gala.

“For nearly 30 years, Mark Berkowsky has been a stalwart champion of Eden’s mission,” said Eden Trustee and Chair of the Eden Dreams Committee Maribeth Edmunds. “I know I speak for all parents when I tell you that your vision and extraordinary dedication to others brings some peace as a parent of a child with autism.”

Berkowksy, a Cranbury resident, was instrumental in helping Eden open the new Schalks Crossing Day Center for aging adults with autism. Together with his family and company, Berkowsky and Associates, Berkowsky has spent nearly three decades serving Eden in a variety of ways including joining the board and committees, volunteering his time, and most recently working with his employees and family to raise over $25,000 during the Eden Autism 5K.

“It has been a pleasure to give back to the community which Eden serves,” Berkowsky said. “I’m a strong believer in giving back to the community, especially utilizing my professional and financial resources. I believe that the more we give, the more we get back. The real rewards I have received are to see and hear how Eden has improved the lives of our participants, empowering them to reach their full potential.”

Additional highlights from the evening include Event FX Productions’ décor, which brought the silver screen to life. Guests spent the night surrounded by iconic scenes from film, dancing alongside the likes of Gene Kelly and Audrey Hepburn.

Your ticket for the: Eden Dreams celebrates Eden Autism’s past while raising money for the future