Donor Spotlight is a new series highlights a different Eden Autism donor every month. To launch the series, we’re sharing the story of a man who has spent his entire career giving back to Eden families, Ken Dorfman.

For Ken Dorfman, being a teacher at Eden Autism is more than just a job — it’s his passion.

“Thirty-eight years later, and I still wake up and love coming to work,” said Dorfman. 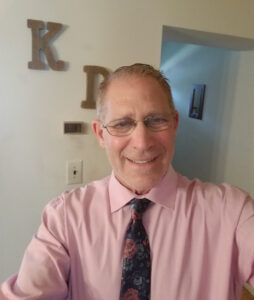 Dorfman joined Eden in 1981, and he has been an integral part of the Eden family ever since. As the lead teacher of High School 4, he helps students learn key employment and life skills. However, his commitment to Eden’s students extends far beyond his work in the classroom.

Over the course of his career, Dorfman has been involved with just about every aspect of the Eden School, including extracurricular programs, community outings, and Special Olympics. Perhaps most importantly, he has consistently been a source of support for Eden families, assisting parents with behavioral challenges and offering extra help through tough times.

“Ken has been an important member of Eden’s school staff for many years,” said Chief Program Officer Rachel Tait. “We are grateful for his ongoing generosity, willingness to always lend a hand, and the support he has provided to families and staff members during his 38 years of service with Eden.”

Dorfman’s generosity hasn’t gone unnoticed. “Ken was the best teacher, and he was the best helper,” said Eden participant Adam Bloomberg, who often asks to see his former teacher when he returns to the Eden School.

“Ken’s commitment and dedication to our mission has transformed the lives of the people we support,” said Eden Autism President and CEO Michael Decker. “His years of service and support represent the very best of Eden, and we are forever thankful for all that he has done for our students, staff, and families.”

In addition to volunteering his time, Dorfman also joined Eden’s Legacy Society as a way to help ensure the nonprofit will continue to support children and adults long after he leaves.

“I wanted to do my part anyway that I could, and monetarily I was able to join the Legacy Society. It felt good because they’ve given me so much — they’ve allowed me to work here and grow and develop relationships with families. The organization allowed me to work here for 38 years, so this is my way of giving back in a way besides volunteering my time, to monetarily ensure there is a future.”

Dorfman’s passion for helping others began long before he started working at Eden. Growing up, he would play with special needs children who lived in his development, often teaching them various skills and stepping in when other children would bully them. He knew early on that teaching was the only thing he wanted to do, and he has worked to create a legacy of compassion and enthusiasm that has helped generations of Eden families.

“I feel like that’s why we’re put on this earth — to help people less fortunate than us and make people feel good, to put a smile on their faces,” said Dorfman. “That’s been my whole outlook for as long as I can remember.”