When Katerina Bubnovsky’s son, Daniel, joined the Eden School in 2019, the first thing she noticed was the dedication of the staff.

“When we first started at Eden, I was amazed by the support that I received,” said Katerina. “The fact that they [teachers and staff] went to multiple appointments with me — to have someone there so I’m not alone, it was absolutely incredible.” 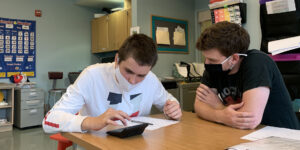 Daniel works on some math problems with his teacher, Patrick.

The simple act of attending one of Daniel’s doctor’s appointments provided a massive relief for Katerina, who could now talk to the doctor freely without worrying about Daniel having a behavioral issue. “I would be so consumed with trying to distract Daniel that I forgot half the things I wanted to talk about to the doctor,” she said. “But then Patrick [Daniel’s teacher] would take Daniel to the playroom, and Brittany [a behavior analyst] and I would discuss the concerns with the doctor.”

While moments in doctor’s offices are huge for Eden parents, it’s business as usual for Eden staff.

“I just feel proud of what we do as a school and as a lifetime services provider,” said Lead Teacher Christopher Caravella. “It never stops feeling good to hear parents thanking us, but for us it’s almost like of course we’ll help you get bloodwork and we’ll tag along to help him get vaccinated — Patrick also walked around with Daniel while his mom got vaccinated. It’s just what we do. For us, it’s like second nature.”

Daniel has a strong bond with his teachers. Katerina said her son is very social, and he not only knows everyone at the school, but he knows what pets or kids they have and what they do on the weekends. The classroom is a place of comfort for Daniel, and both him and Katerina were excited for him to return when the school resumed in-person classes.

When Daniel is at Eden, Katerina knows he’s not just at a place where he’s able to learn and grow, but he’s surrounded by a team of people who will always do what they can to make sure her child is completely taken care of.

“I never thought that I’d get to the point where other people understand Daniel the way that I do, and that’s one of the most incredible things about the staff at Eden — that they really care and keep our kids and adults safe,” she said.

Celebrate Eden Stories by sharing this story, sharing your own, or donating to Eden as part of our Day of Giving.

Your ticket for the: Eden Stories: Daniel’s remarkable bond with his teachers