Growing up at Eden: Travis’s Story

Travis Gaunt has been at Eden Autism since he was 21 months old, first joining the early intervention at Wawa House. Today, he’s a 28-year-old finding independence in Eden’s supported housing. 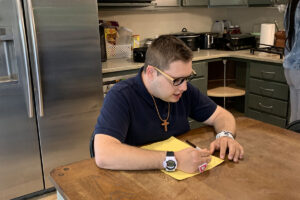 Travis makes a shopping list to get ready for his next trip to the store.

“There’s so much good stuff to say about Travis. He’s got a sweet personality, he’s very helpful and energetic. For the most part, he knows how to do everything on his own. We really just provide assistance for him,” said Direct Support Professional Jazmin Jenkins. “At this point, we’re like a family.”

Knowing that Travis is safe, well cared for, and in an environment that encourages him to grow means the world to Travis’s mom, Missy Gaunt.

“In the beginning, you don’t think that not having to worry is an attainable goal, but it totally is,” said Missy. “To not have that burden to worry about your child, to know he’s in a home where he’s safe, to know he can communicate with me about how he’s feeling even though his communication skills aren’t very strong — all of this is huge.”

Eden has been part of Travis’s life since he was a child. Travis was accepted into the Eden School when he was 3, and over the years Travis has improved his communication skills, joined Eden’s day program after graduating from the school, and began working multiple jobs. 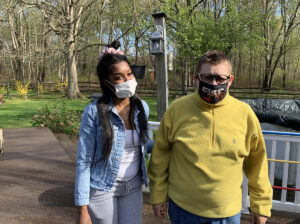 “I never thought he’d be able to work, and now he has two jobs,” said Missy. While he’s currently furloughed due to the coronavirus, he’s looking forward to getting back to work at TJ Maxx and The Westin. Working doesn’t just give Travis a sense of pride and fulfillment, it fills his family with pride as well.

A few years ago, Travis and his parents attended The Westin’s holiday party. “It was all his typically-developing colleagues, he was dancing, and we were just overwhelmed with an abundance of happiness,” said Missy.

Travis first moved into an Eden group home when he was 25 years old, and he easily adjusted to his new home. Travis’s room is filled with his drawings and pictures he colored, and he has an extensive movie collection that he enjoys showing off.

“He wants to do everything,” said Direct Support Professional Sharese Platt. “He likes activities, he’s always ready to party. He wants to go to the store. He wants to help out around the house, take out the garbage. Travis is the helper.”

For Missy, knowing her child is happy in his home gives her a feeling of happiness that is unlike any other.

“Life doesn’t end because you have a child with a disability,” said Missy. “With Eden, it continues milestone after milestone through the betterment of your child. Just making sure your loved one is happy is huge, but then to have them learn life skills, having birthday parties at home with their friends, doing chores and cooking — it’s all amazing.”

Celebrate Eden Stories by sharing this story, sharing your own, or donating to Eden as part of our Day of Giving.

Your ticket for the: Growing up at Eden: Travis’s Story

Growing up at Eden: Travis’s Story