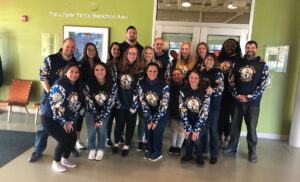 Some of the Frozen Hedgehogs team members wore their Polar Bear Plunge hoodies to the Eden School.

The Frozen Hedgehogs team, made up of Eden Autism staff, family, and friends, raised over $8,700 for Special Olympics NJ programs.

The Polar Bear Plunge at Seaside is the largest plunge in the state. Over 8,000 plungers raised more than $2.3 million for the nonprofit, breaking the event’s previous fundraising record. An additional 100,000 spectators were on hand to cheer on the plungers this year, more than doubling the amount of spectators from last year.

Despite the low temperatures — the ocean temperate was in the 40s — Seaside had a summer-like atmosphere thanks to the plungers and spectators who came out to support a tremendous cause.

Your ticket for the: Frozen Hedgehogs brave chilly waters for Special Olympics NJ