After dipping the back tire of his bike in the Pacific Ocean on August 30, Matt peddled across the country on a journey to raise money and awareness for Eden Autism. Inspired by his brother Michael, who has autism and down syndrome, Matt raised over $17,500 for Eden. 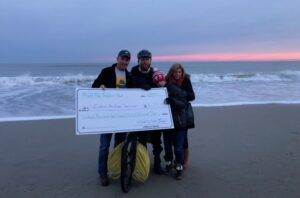 Matt DiNote holds a ceremonial check to Eden Autism after arriving in Sea Isle on December 19. He’s pictured with his brother, Michael, and parents, Lenny and Patti.

Matt’s incredible cross-country adventure came to an end on Saturday, December 19 when he arrived in Sea Isle. His family and friends greeted him at the beach, where he ceremoniously dipped his front tire into the Atlantic Ocean.

“When I got here, I just let my emotions flow. They just took over, It was happy tears that I was wiping from my eyes,” Matt told OCNJ Daily.

Matt embraced Michael on the beach, an emotional sight that brought tears to the eyes of friends and onlookers. The two brothers were soon joined by their parents, Lenny and Patti, who are immensely proud of their son.

“Matt DiNote’s determination and love for his brother inspired not only all of us here at Eden, but individuals across the nation,” said Eden Autism President & CEO Michael Decker. “We are honored to be the beneficiary of Matt’s labor of love.”

Matt traveled along a southern route designed to avoid highways and mountains, documenting his trip on his blog. He arrived in St. Augustine, Florida, on November 25, where he then traveled up the east coast. Aside from the first day of his journey when he was joined by his girlfriend, Aslyn, Matt traveled solo. He packed light, carrying just a few essentials and a carbon fiber guitar to write and play some music.

Matt’s journey took him across desert landscapes, through small towns, and into big cities. But perhaps one of the most comforting sights on his trip was coming across a Wawa in Virginia — a welcome sign that he was nearing home. “What a glorious sight when you pull up on one of those after being deprived for so long,” Matt wrote on his blog. The famous convenience stores hold a special place in the hearts of the DiNote family — Michael works at a Wawa through their supportive employment program.

When he needed a bit of inspiration to keep going, Matt would think of his brother. Every pedal brought him a little bit closer to being reunited with his family.

While this surely isn’t the last of Matt’s adventures, for now he is looking forward to enjoying the holidays resting at home with his family.

Click here to watch a video of Matt’s return. To donate to Matt’s fundraiser, visit his GoFundMe page.

Your ticket for the: Matt DiNote completes cross-country bike trip, raising over $17,000 for Eden Autism