Update: Matt reached his $10,000 goal before he even left California! He’s now trying to raise $15,000 before he makes it back to New Jersey.

When Matt DiNote’s original plans for 2020 were put on hold due to the coronavirus, he knew this was the perfect opportunity to accomplish his dream of biking cross-country — all while raising money for Eden Autism.

Matt is riding his bike from San Diego, CA to Sea Isle City, NJ to raise money for Eden Autism. His goal is to raise $10,000 — roughly $2 for every mile of his journey — but he hopes to surpass the goal before he finishes the trip. 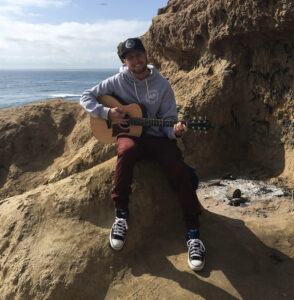 Matt DiNote is riding his bike from California to New Jersey to raise money for Eden Autism.

Matt leaves this Sunday, August 30, and plans to take a southern route to avoid mountains and highways. He doesn’t know exactly how long the trip will take him, but he’s excited to get started. “It’s more of a mental thing. As long as you just keep your legs moving and keep going, I’ll get there eventually,” said Matt.

While Matt will be traveling solo, his brother, Michael, will be with him in spirit. Michael, who has autism and down syndrome, is an inspiration to Matt.

“I wouldn’t be the person I am today if it weren’t for him,” said Matt. “He’s had the biggest influence on my life, so it just seemed right to dedicate this ride to him. He’s helped me realize that you can be happy with just the simplest of things.”

When Matt first discovered Eden, he was struck by the quality of the residential program and the support offered to families. He and his family have seen firsthand how support and opportunities can change the lives of individuals with disabilities. Michael is doing very well, and he’s currently employed by Wawa.

“Our ultimate thing is to have Michael taken care of some day when we’re not around, and what better place than somewhere that’s not just a place — it’s a place with people that care,” said Lenny DiNote, Matt’s father.

Lenny was a little stunned when he first learned his son was planning a cross-country bike ride, but he wasn’t surprised to learn that Matt was turning a once in a lifetime journey into a remarkable act of kindness. “Matt is always there for others, and he’s always looking out to help however he can.” 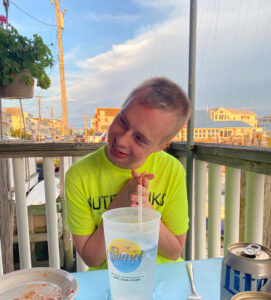 Matt is dedicating the ride to his brother, Michael, who has autism and down syndrome.

Matt has a long history of philanthropy and travel, spending one semester at sea visiting 15 different countries and building houses across the nation with AmeriCorps. He first had the idea to ride cross-country back in October, but with other projects in the works he put the idea on the back burner. Matt originally planned to join the Peace Corps this year, but they temporarily suspended parts of their program due to the coronavirus.

Rather than dwell on what he couldn’t do, Matt turned this into an opportunity to accomplish his dream of biking coast to coast.

The New Jersey native is traveling light, with just a few essentials and a carbon fiber guitar to write and play some music. While not everyone would be able to enjoy living in a tent by themselves for a long period of time, Matt admits that things don’t seem that crazy to him after all the adventures he’s had.

And when he needs some motivation to continue his journey, he will think of his brother and the individuals at Eden Autism to help him reach the Atlantic Ocean.

“All I know is helping other people, whether it’s one person or a group of people, is what makes me happiest, so that’s what I wanted to do with this,” said Matt.

To donate to Matt’s fundraiser, visit his GoFundMe page. To get updates about Matt’s journey, visit whereismattthehat.com.

Your ticket for the: Pedal for Philanthropy: One man’s cross-country bike ride for Eden Autism