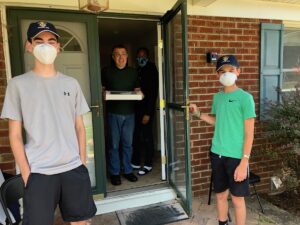 Joey Rafferty and Francis Rafferty delivered food to an Eden residence as part of the Knight of Columbus Princeton effort to deliver meals to Eden’s group homes each week.

Eden Autism’s residential participants and staff have been receiving some delicious special deliveries, courtesy of one of Eden’s longest community supporters.

Since mid-July, the Knights of Columbus Princeton Council No. 636 have been purchasing and delivering meals to all of Eden’s 28 group homes and apartments. Every Tuesday, half of Eden’s residences receive lunches for both the participants and staff, with the other half receiving meals the following week. The meals range from pizza to chicken fingers and French fries, often with donuts and other treats included.

The Knights of Columbus estimate that they have delivered roughly 350 meals in the last four weeks, and they plan to continue providing meals through September. While the Knights of Columbus were unable to host their annual picnic for Eden families and staff due to precautions against the coronavirus, dropping off food has enabled them to remain connected to the organization. 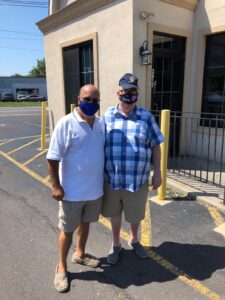 Vito Pulito and Joe Bendas, members of the Knights of Columbus Princeton Council No. 636, are part of the team who deliver meals to Eden’s group homes every week.

“I’ve enjoyed it. I’ve delivered all four weeks. We’ve (the Knights of Columbus) put the Eden family picnic on and we aren’t able to do that this year. This has been a nice alternative,” said Knights District Deputy Vito Pulito.

The Knights of Columbus have partnered with local businesses that offer the meals at a discounted price. Vincent’s Pizza and Donuts Time, both located in Hamilton, have been providing a variety of food for Eden’s staff and residents.

“The Knights of Columbus are longtime friends of Eden,” said Eden Autism Chief Development Officer Melinda McAleer. “Many of the members have volunteered for years. Seeing teenagers and young adults join the Knights in serving the men and women in our residential program reassures us that the community will continue to help carry out Eden’s mission for years to come.”

For Joe Bendas, Grand Knight and one of Eden’s earliest volunteers, delivering meals provides much more than an opportunity to give back — it’s a way to stay connected during these extraordinary times.

“What prompted me to start this? It’s simple, I miss Eden,” said Joe. In keeping with his advocacy and mentoring, Joe has been recruiting high school and college-age students to help deliver the meals and to volunteer at the Eden 5K and the Eden Family Picnic. Eight of them have been part of the meal delivery effort. “My goal is for all of these young people to carry on with Eden for many years to come.”

Your ticket for the: Knights of Columbus Princeton deliver meals to Eden’s group homes