The annual Eden Autism 5K & 1-Mile Fun Run/Walk holds a special place in the hearts of the McHale family.

Just two days before the inaugural race, Brian and Laura McHale learned that their son, Brian, was accepted into the Eden School. The race has served as an annual celebration of the moment that changed their son’s life. 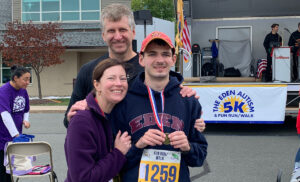 “When Brian was young, we had all of these fears about what would happen when he became an adult,” said Brian. “We had anxiety about him being able to participate in things in his community, and the progress that Brian has made has been incredibly remarkable. He helps around the house, he’s worked — he’s just grown into a wonderful young man.”

Despite moving to Maryland earlier this year, Brian continued to serve as chair of the 5K committee. The McHale family may no longer live in New Jersey, but they will always be part of the Eden family.

“The people at Eden who worked with Brian are just the best people we know,” said Brian. “They’re so inspirational to us, and some of the staff have become a part of our family. We have a debt of gratitude to Eden.”

After spending over a decade fundraising for his 5K team, Brian has learned some valuable tips for other families and community members looking to get more involved.

Don’t be afraid to ask.

While Brian admits that it can sometimes feel awkward asking for donations, he has been surprised by how eager people are to help him reach his fundraising goal.

“People are more willing to help out than I first realized,” he said.

For individuals who don’t feel comfortable directly asking people to donate, sharing posts on social media about the race with a link to your fundraising page is a great way to indirectly ask people while spreading awareness about the overall event.

Reach out across multiple channels.

Brian shared a LinkedIn post about his 5K team earlier this year and that led to a donation from an old friend that he hasn’t seen in nearly a decade. “Don’t underestimate the power of sharing those posts on LinkedIn and Facebook because sometimes even people you haven’t connected with in a long time will donate,” he said.

The more personal your message is, the bigger impact it will have.

“I know it can be hard to talk about,” Brian said. “When I worked at my old company, my boss didn’t even know about Brian until I had been working there for over five years, so I can understand that a lot of people don’t want to talk about their kid’s situation.”

Brian recommends sharing as much of your story as you’re comfortable telling. In fact, by reaching out to people across multiple channels, Brian says you can select how much of your story you share with certain individuals. You can send a more personal message to a select group of people through email and create a more general post about the event for social media.

Thanking people who donate to your fundraiser goes a long way. Brian sends each person who donates to his team a personalized thank you. Whether it’s a note in the mail, a phone call, or a simple text message, people like to feel acknowledged after they donate.

“I always donate to people’s Facebook fundraisers, and I find myself continually donating to the ones where people reach out and say thank you,” said Brian.

Celebrate with your team.

For Brian and many Eden families, the best thing about the 5K is gathering together with your family, other Eden families, and old friends while raising money for a great cause. While this year’s virtual race will be a bit different, there are still opportunities to bring people together to thank them for their support and celebrate their 5K or 1-mile journey.

This year, Brian plans to gather his friends and family together on a Zoom call Sunday afternoon to safely celebrate together. No matter where people are running the race, Brian is looking forward to coming together virtually to celebrate Eden’s mission.

“The services Eden provides are exceptional, and we are fortunate to have been able to have Eden as part of our lives for 18 years,” he said.