The rain did not stop hundreds of people from coming together to support Eden Autism during our annual 5K & Fun Run/Walk! 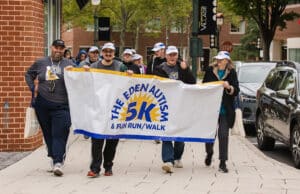 Walkers lead the way during the Fun Run/Walk

Over 900 runners and walkers participated in the 2022 races. Two races, a 5K and Fun Run/Walk, were held at the Eden School on October 2, and a virtual race ran throughout the same weekend.

Runners, walkers, sponsors, and donors come together to raise over $165,000 to support Eden!

“I’m very grateful for the great work that the Eden team did to quickly pivot and turn around. In spite of bad weather, the team was able to deliver miles and smiles to runners and walkers,” said 5K Co-Chair Paola Silva Barajas. “I’m very thankful for all the support from families and friends that the Eden 5K has received through sponsorship, being part of the committee, fundraising, or simply by bringing their best friends to run or walk. Every bit helped to make this event a big celebration and success. Even in the cold, I felt the warmth from Eden.”

This is Paola’s first year as co-chair, serving alongside former Eden parent Brian McHale. “I’m especially thankful for the opportunity to serve alongside Brian, who has been an incredible source of inspiration,” she said.

“It was great to see so many runners and supporters of Eden despite the wind and the rain,” said Brian. “We are very fortunate for the generous support we continue to receive from corporate sponsors such as Firmenich and Berkowsky & Associates and teams like Brielle’s Voice and Make a Difference for Jim Brown.”

Eden’s Director of IT, Compliance & Privacy Officer John Zahorsky dyed his hair orange as a fundraiser for the Eden Autism 5K!

Stacie Sherman, Ian Wright, and Linda Scharfman were the top three individual fundraisers, respectively. Eden’s Director of IT, Compliance & Privacy Officer John Zahorsky nearly tripled his goal by raising over $6,100! As promised, he was at the 5K rocking his freshly dyed orange hair to celebrate his goal.

Whether you were a runner, walker, volunteer, or donor, everyone at Eden is grateful for your commitment to Eden. “I wanted to thank our many volunteers who gave of their time and were flexible to deal with weather and last-minute changes,” said Brian. “The race was not possible without all of you.”

We’ll continue to fundraise through the end of the year to hit our goal of $175,000! Click here to donate to a team or share the link with friends and family.